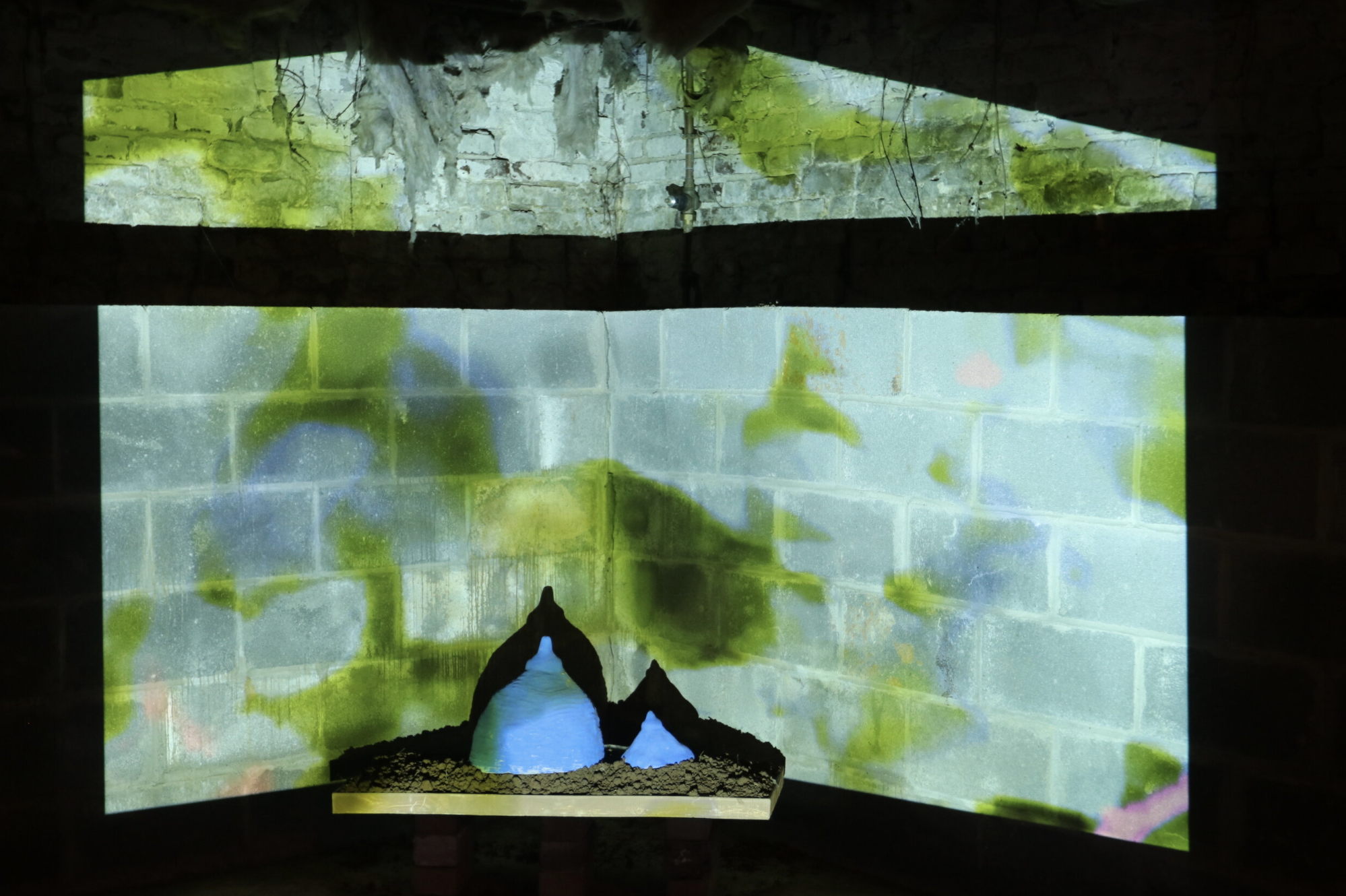 Le Swamp, an artist-run space in Knoxville, Tennessee, transforms the unfinished basement of its co-directors’, Ashley Ekstrum and Victoria Rexhausen’s, residence into a curatorial art space.

Ekstrum, a University of Tennessee graduate student studying painting, co-founded the space in 2020 with Rexhausen, an herbalist and graduate student studying water resources and engineering. Their unique pairing of disciplines reflects Le Swamp’s larger aim to facilitate conversations between artists and visitors of diverse disciplines and media.

Ekstrum’s desire to curate and the limitations of the pandemic led her to experiment with installing art in her residential space.

“What really started it was during COVID everything shut down, and so I was making— I was painting— in the space that I was living,” Ekstrum said in an interview. “And so we cleared out the space that was the laundry room and cleared out the bathroom and just hung paintings in there to see what they looked like.”

These first experiments became Kitty Litter Gallery, later evolving into Le Swamp at Ekstrum’s next residence, the new name inspired by the space’s cold, wet environment on a hill that rushes with water everytime it rains.

“There's a domestic feeling to the space, because it’s under where we live. And so, you know, I have all these meanings that I put onto it, because it’s the same floor plan as the house above it. And it has all the same rooms, but instead of floor and drywall, it’s beams and dirt.” Ekstrum noted. “There's a domestic sense to it that you don't get in a white wall gallery or something like that, but then there’s the deterioration aspect of it. the two shows I'm thinking of specifically are Nuveen’s show and Emily’s show that were in there.”

Nuveen Barwari’s show Evîna Me Bê Sînore, translated from Kurdish to Our Love is Without Borders, was installed at Le Swamp in September, 2021. Barwari’s installations piece together textiles, including Kurdish dresses and found materials.

“She’s stretched fabric before, Kurdish fabric, into squares and [rectangles], but I saw the work honestly change from when it was free flowing in a white wall and a perfect rectangle to a wall that was like slightly wonky, slightly crooked, and had bricks that were falling out. And it just felt like it was free to be itself there.”

The environment of Le Swamp differs vastly from a traditional gallery space with all white walls by incorporating darkness, deterioration, and unfinished spaces.

Emily McCall Roca Rice’s exhibition, Being and Becoming, interacts with the deteriorating environment of Le Swamp through installation of clay, found objects, sculpture, and projection.

“Seeing it in the Swamp, it felt like it had emerged from the ground, and it felt like the space had almost birthed it.”

In her curation of Le Swamp, Ekstrum aims to facilitate a creative, interdisciplinary space.

“Something I’ve been frustrated with in the art world is I think art is way more expansive than just a painting on a wall. And so, I think that connecting the similar processes that happen in different mediums can provide a lot of different connections between humans that have been lost.”

“I want the boundaries of all these little boxes that we’ve put ourselves in— like painters, drawers, ceramicists, scientists, you know, digital artist. I want them to open up and have different conversations.”

Le Swamp brings together a wide variety of artists and spectators, encouraging conversation about the creative processes embedded in any discipline. At Le Swamp Ekstrum continues to co-curate exhibitions with local artists, transforming the space into an experimental ground for interdisciplinary languages to collide.